Lavish Love {a letter to my husband} 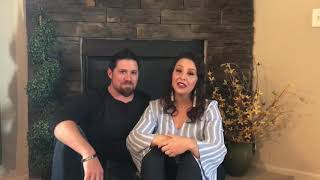 Our Personal Invitation to our Online Release Party!!

What a year! (This Last Year in Quick Review)

WOW! This last year has been a whirlwind! Finally in a season of life where I can focus on my career as an author, with an incredibly supportive husband, family, and friends, I released my first new book August 2017. It was a new genre for me to write, and a new style, but it was so FUN and the feedback so far has been amazing. I'm incredibly grateful everyday I get to be a part of this literary world with each of you. It's been the amazing people I've been able to meet that has been my greatest gift from this journey. I'm so happy I can make you smile, laugh, and feel empowered when you read my works.

It started with the release of my historical romance/crime novel Race to the Gallows, Book 1 in the Mavericks of the Heartland series. Set in the 1940's, a couple who are madly in love fight against the workings of the criminal underworld in their sleepy Northwest Iowa town. Based on true events that took place near my hometown!

Then I had the blessing of doing a signing at the amazing PennedCon book festival! That was like my unicorn - I'd wanted to attend PennedCon for years, but finally had the chance in 2017! The people I've met there - readers, bloggers, and fellow authors - have been some of my greatest inspiration and gifts in life! Now I have a community of other writers who are incredible!

Then, to my amazement, the book (Race to the Gallows) started taking off and we were so grateful to be a part of the North Iowa Book Bash! I'd been following Lori and the BF Bookies for a while but then to meet them in person - WOW! I was just so grateful to be a part of an amazing group of authors and readers! My husband, Branden, was able to get started on his book cover modeling gig as well. (He's hot, not going to lie!)

Soon, my 2018 book signing schedule filled up and I was able to release the second book in the Mavericks of the Heartland Series!

So, it's been an amazing year. Thanks for being along for the ride!!! Stay tuned, the next blog post will be about my upcoming release of The Silken Daggers, Book 2 in the Mavericks of the Heartland series, releasing 9/6/18!